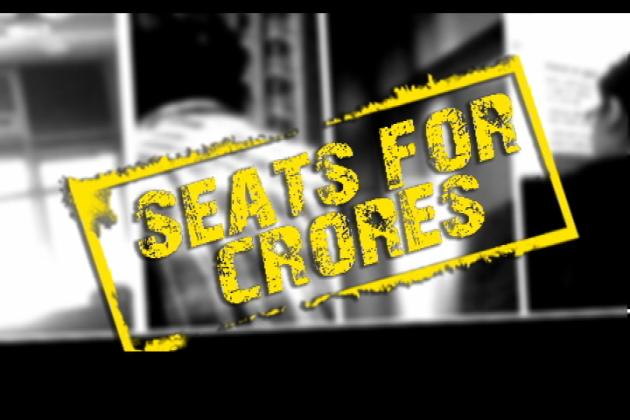 The Medical Council of India (MCI) on Friday wrote to the Central Bureau of Investigation (CBI) asking for a probe into a sting operation conducted by CNN-IBN which exposed the sale of post-graduate medical seats in colleges across three states for crores of rupees. The CNN-IBN sting had caught five colleges taking crores for admissions. The MCI has handed over the sting operation tapes to the CBI.

The CBI will also probe a complaint filed by BSP MP Seema Upadhyay who was reportedly asked to pay Rs 1.5 crore for her daughter's admission in Subharti medical college in Meerut.

Upadhyay, an MP from Fatehpur Sikri, has now written a letter to the MCI, the Health Minister and the CBI, asking for a probe into the illegal sale of medical seats in Subharti medical college.

"When I went there for my daughter's admission, they hinted that I needed to pay money for a seat. I spoke to students who were studying there and found out the college charges anything between Rs 1-1.5 crore per seat. I was shocked at the rampant corruption. How does a meritorious student then get admission? I have written to the MCI, the CBI, the PMO, the President and the Health Minister. I want a CBI inquiry into the matter. I will raise this issue in Parliament as well," Upadhyay told CNN-IBN.

Subharti medical college has, however, denied the charges and said, "We told BSP MP Seema Upadhyay and her MLA husband that admission was possible only after the declaration of the result of competitive exams. My security staff filed an FIR against them. They are telling absolute lies."

October 14, 2012
National Board of Examinations (DNB CET) Dated : October 9th, 2012 Subject : Verification of Provisional /Permanent Registration with State Medical Council /Medical Council of India – Test Day Documentary Requirements -Regarding. Kind Attn : All Candidates for DNB CET: November 16th to 20th, 2012  In terms of the eligibility criteria for appearing in DNB CET scheduled for 16th November – 20th November 2012 all applicant candidates are hereby informed that they are required to produce their original certificate of provisional /permanent registration with the State Medical Council (SMC)/ Medical Council of India (MCI) at the test centre before appearing in the DNB CET (on the date of their scheduled test day). This is in addition to the production of an original and Valid ID as PAN CARD/Voters Regn. ID Card/Aadhar Card/Passport/Driving License on test day as indicated in information bulletin.  Candidates are required to bring the original SMC/MCI certificate along with a clear photoco
Read Full Post >>

March 25, 2014
Hello all DNB Broad Speciality Aspirant, The counselling for dnb has started and we are getting a lot of queries regarding wheather to join family medicine or not. Everybody is in confusion regarding family medicine. So I thought of writing this article describing some points about Family Medicine so that all FM aspirants can make a informed choice. This post is not a advice or justification to whether family medicine as a course is a good choice or bad. First things first No one other than you yourself is a better judge of your future and career. So read this, consult your seniors but finally sit down with calm head and analyse yourself before making final decision. Now next thing is and this not only applies for family medicine but all the branches. Ask yourself that will you be satisfied with the course, because your happiness and satisfaction is important. If you are satisfied, any kind of hurdle wont affect you and you will find the solution anyway but if you are not happy then
Read Full Post >>