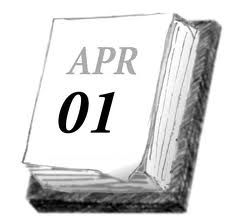 Indian medicos, who appeared for NEET PG and DNB exams in Nov - Dec 2012 enjoyed The 1st April 2013 with DNB and NEET PG result declaration rumors.
Today is 1st April and traditionally it is celebrated as 'April Fool's Day'. Friends try to make fool of other friends on this day for fun.
Among medical community, as soon as clock hit 12AM on 1st April 2013,  FB and other medical websites were flooded with rumors of declaration of DNB and NEET results. The students who got trapped made fool of themselves. Some students took it lightly and joined in this humor to try and fool other medicos, but some got angry and started abusing the original posters of such rumors.

Medicos who are frustrated to the extreme due to veryyyy long delay of NEET and DNB results, tried to lighten their tension by playing such pranks.

On the other hand apart from jokes, DNB and NEET results have not been declared yet. Next NEET PG hearing is on 2nd April 2013 (tomorrow). Stay on NEET results is still effective. We advice not to take any serious action based on such pranks and always check the official natboard website http://natboard.edu.in for updates on results.

October 14, 2012
National Board of Examinations (DNB CET) Dated : October 9th, 2012 Subject : Verification of Provisional /Permanent Registration with State Medical Council /Medical Council of India – Test Day Documentary Requirements -Regarding. Kind Attn : All Candidates for DNB CET: November 16th to 20th, 2012  In terms of the eligibility criteria for appearing in DNB CET scheduled for 16th November – 20th November 2012 all applicant candidates are hereby informed that they are required to produce their original certificate of provisional /permanent registration with the State Medical Council (SMC)/ Medical Council of India (MCI) at the test centre before appearing in the DNB CET (on the date of their scheduled test day). This is in addition to the production of an original and Valid ID as PAN CARD/Voters Regn. ID Card/Aadhar Card/Passport/Driving License on test day as indicated in information bulletin.  Candidates are required to bring the original SMC/MCI certificate along with a clear photoco
Read Full Post >>

March 25, 2014
Hello all DNB Broad Speciality Aspirant, The counselling for dnb has started and we are getting a lot of queries regarding wheather to join family medicine or not. Everybody is in confusion regarding family medicine. So I thought of writing this article describing some points about Family Medicine so that all FM aspirants can make a informed choice. This post is not a advice or justification to whether family medicine as a course is a good choice or bad. First things first No one other than you yourself is a better judge of your future and career. So read this, consult your seniors but finally sit down with calm head and analyse yourself before making final decision. Now next thing is and this not only applies for family medicine but all the branches. Ask yourself that will you be satisfied with the course, because your happiness and satisfaction is important. If you are satisfied, any kind of hurdle wont affect you and you will find the solution anyway but if you are not happy then
Read Full Post >>