Showing posts from March, 2014
Show all

The Crime Investigation Department (CID) of Andhra Pradesh Police on Tuesday booked a case in connection with the alleged irregularities in the exam.

"The CID has registered a case on charge of cheating and under other relevant sections of IPC and AP Prevention of Malpractices and Unfair Means Act, and has begun its probe," director general of police B Prasada Rao said.

The state government had on Monday ordered a CID inquiry into the alleged irregularities in PG Medical Entrance Exam, after a one-man committee, headed by State Council of Higher Education Chairman, L Venugopal Reddy, constituted to look into the issue submitted its report to Governor E S L Narasimhan.

Prof LV Venugopal Reddy will be conducting the inquiry. The governor’s decision came after a delegation of junior doctors had takenthe matter to his notice.

Earlier, a large group of MBBS graduates, who have appeared for AP PG Medical Entrance test, organised a protest rally from Siddartha Medical College to NTR University of Health Sciences (NTRUHS) Tuesday demanding a probe into the irregularities in the entrance test and reconduct of the exam by putting a stay on admissions counselling.

“Aspirants who have fared miserably in the PG entrance tests of the other states have scored top ranks in AP PG Medical Entrance Examination-2014 (APPGMEE) , giving scope to a lot of suspicions. There are glaring differences between the ranks that many candidates scored in the AP PG exam and other nationwide exams. How can a student who fared so badly in the oth…
Read Full Post >> 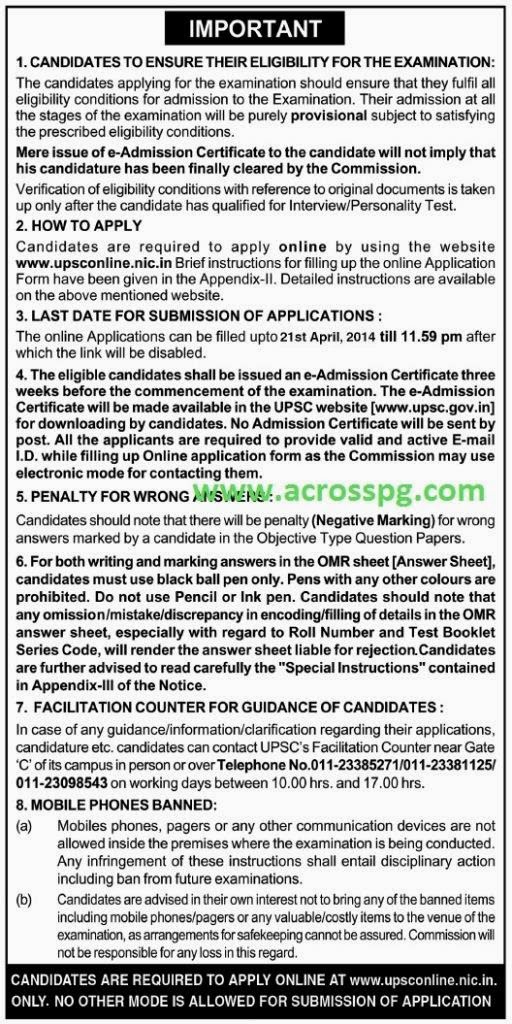 March 22, 2014
Hyderabad: The state government is likely to conduct a re-exam for PG medical admissions for the coming academic year, 2014-15, after being hit by controversy. Students complained of question paper leakage and large-scale irregularities in the results announced recently by the NTR. University of Health Sciences.

The state government appointed a committee to inquire into the issue following the directions of Governor E.S.L. Narasimhan. The committee is likely to recommend a re-test to clear doubts among students.

Inquiry committee chairman Prof. L. Venugopala Reddy, also the chairman of the Andhra Pradesh State Council of Higher Education, said that the committee will submit its report to the government in a week. Prof. Reddy has been receiving complaints from students at the public hearings held at the Nagarjuna University since March 20.

“We have received a lot of complaints from students regarding irregularities during the examination. Though the students could not submit any concre…
Read Full Post >> 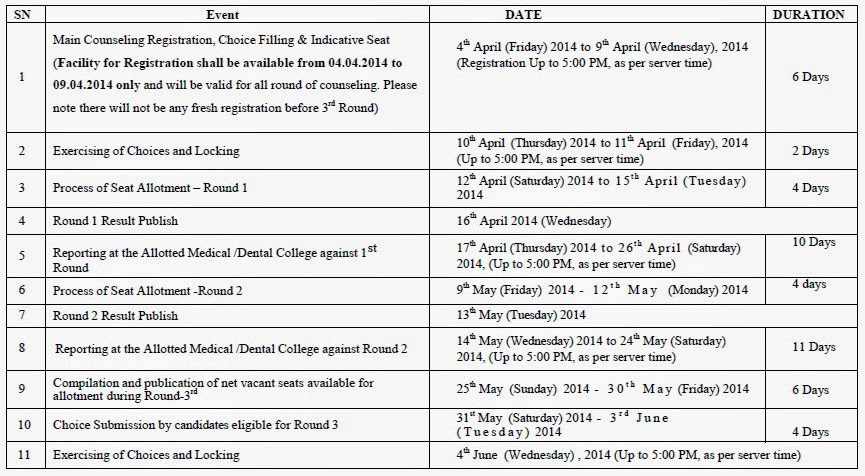 All qualified candidates please note that the Registration, choice filling/locking done earlier between 28.02.2014 to 07.03.2014 will be treated null and void (cancelled). All qualified candidates interested in participating in online PG All India Quota Counseling are required to register and complete procedure, afresh, as mentioned in schedule below. 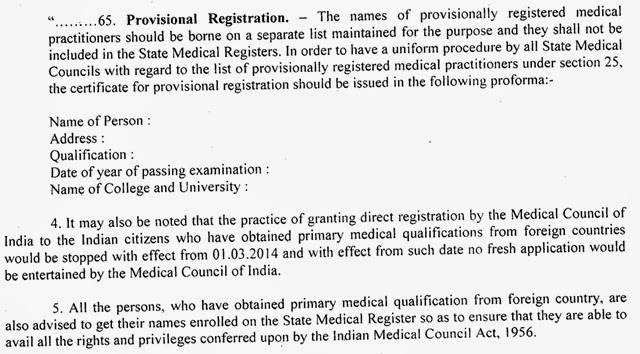 In a recent notification by MCI now all fresh foreign medical graduates will have to register to their respective state medical councils after clearing MCI screening exam. Direct registration to MCI will not be entertained with effect from 1st March 2014.

The official notice is HERE 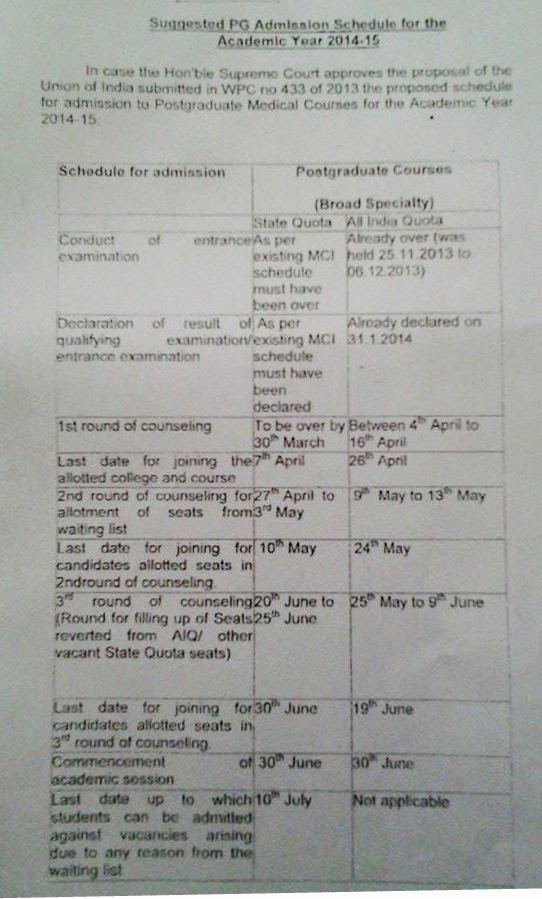 DR FRAZ NASEEM & ORS Petitioner(s)
VERSUS
UNION OF INDIA & ORS Respondent(s)
(With application for directions, stay, intervention, impleadment, permission to file additional documents and office report)
WITH
W.P(C) NO. 716 of 2013
.............................
UPON hearing counsel the Court made the following
O R D E R
WP(C) NO.433 of 2013 [OUT-TODAY]
4
We have heard learned counsel for the parties. For the time being we fix the following schedule for
the admissions to the Post Graduate Medical Courses for the academic session 2014-2015:- 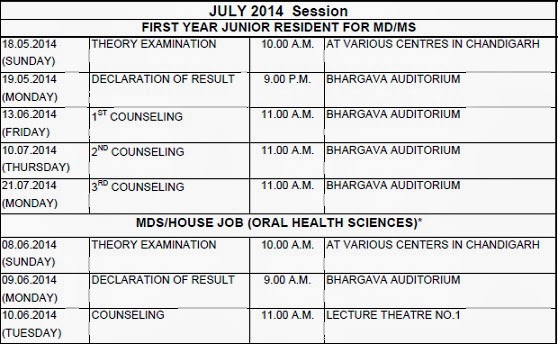 
APPLICATION PROCEDURE
1. The Application form is available on the PGIMER website (www.pgimer.edu.in), where the candidate can fill up the var…
Read Full Post >>

Stay on All India Counselling, Registration will continue according to schedule

March 03, 2014
NOTICE REGARDING CONTINUATION OF REGISTRATION FOR ALL INDIA QUOTA PG 2014 ONLINE COUNSELING
Reference interim order dated 28.02.1014 of the Supreme Court of India in Writ Petition in the Title: Dr. Fraz Naseem & Ors V/S UOI & Ors Case: IA.13 in CWP. 433/2013 with Akshay Sindu & Ors V/S UOI & Ors CWP. 716/2013 Lipika Gupta V/S UOI & Ors CWP. 737/2013 Priya Gupta V/S State of Chattisgarh & Ors IA.NO… /2014 IN CA.4318/2012 , the registration for the All India Quota PG 2014 Online Counseling continues as per Counseling Schedule. The processing of filled choices shall not be done by the Medical Counseling Committee (MCC) till further directions from the Hon’ble Supreme Court in above petitions.