Showing posts from June, 2015
Show all

June 26, 2015
Source: Indian Express The Assam government has initiated legal action to recover Rs 20 lakh each from as many as 244 doctors who had obtained their post-graduate medical degree in 2014 for violating a commitment for serving at least 10 years under the state government, Chief Minister Tarun Gogoi said in Guwahati on Thursday. The chief minister also directed the state health and family welfare department to immediately initiate strict legal action against those PG doctors who have violated the terms and conditions of the agreement they had signed at the time of their admission. Such cases of violation would also be taken up with the Medical Council of India, an official press release quoting the chief minister said. Gogoi, who took the matter seriously, said these 244 post-graduate doctors had, prior to admission in the state’s medical colleges, committed to serve the state government for 10 years, for default of which they had also agreed to repay Rs 20 lakh each as compensation. Acc
Read Full Post >> 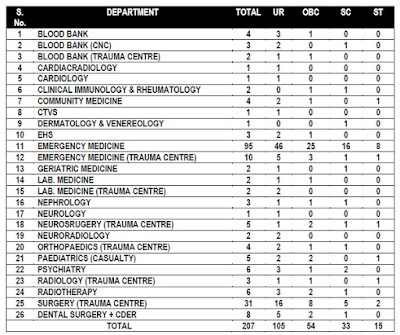 ALL INDIA INSTITUTE OF MEDICAL SCIENCES ANSARI NAGAR, NEW DELHI-110608 No.F.7/2015-Acad.I Dated:28.06.2015 FOR JUNIOR RESIDENT (NON-ACAD.) POSTS (FOR JULY‟2015 SESSION) Subject: Recruitment to the post of Junior Resident (Non-Academic) session July, 2015 i.e. from 01.07.2015 to 31.12.2015 at the AIIMS. The All India Institute of Medical Sciences, New Delhi is an Autonomous Body established under an act of Parliament. As a part of its activities the Institute is running a large teaching hospital for training of undergraduate and postgraduate students in the various fields of Medical Sciences. The ONLINE APPLICATIONS are invited from Indian Citizens for the posts of Junior Residents (Non-Academic) for July, 2015 session in different specialities as indicated below in the pay scale of Rs.15,600/- + 5400/- (GP) per month plus usual allowances including NPA, in the prescribed format and on the terms & conditions given in detail on Institute website – www.aiimsexams.o
Read Full Post >> 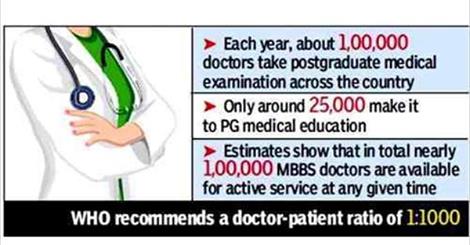 NEW DELHI: The health ministry is planning an exit exam for MBBS students passing out of government as well as private medical colleges. The move comes in the wake of concerns over the quality of doctors being produced in the country. Initially, the government intends to create a separate 'all-India chapter' for doctors qualifying the exit exam. Doctors currently get themselves registered with the state chapter of Medical Council of India (MCI) and have to get their registration transferred if they intend to practice in another state. Those clearing the exit exam will be able to practice anywhere in the country. Eventually, students not passing the exit exam could even be held back from post-graduate studies, an official source privy to the developments told TOI. The draft proposal prepared by the ministry suggests using the existing Foreign Medical Graduate Examination (FMGE) as a voluntary exit exam. FMGE, a screening test recognized by the MCI, was introduced in
Read Full Post >>
More posts