Showing posts from May, 2016
Show all

May 27, 2016
NEW DELHI: The Supreme Court on Friday refuses to stay the ordinance on National Eligibility Cum Entrance Test (NEET), saying there was no need for an interim order and this matter should be mentioned before the Chief Justice of India in July. Justifying its stand, the apex court said that the government has not denied NEET, adding the exemption was given only to some states, which is why there will confusion if it intervenes at this stage. This development comes after a fresh petition was filed in the Supreme Court challenging the validity of the Centre's decision to bring in an ordinance allowing states to conduct their own medical entrance examinations this year. Vyapam scam whistleblower Anand Rai and medical student Sanjeev Saxena yesterday filed a petition in the Supreme Court. A group of students in favour of the NEET ordinance' granting exemption to states from the common entrance test for admission to government medical colleges for 2016-17 had earlier filed
Read Full Post >> 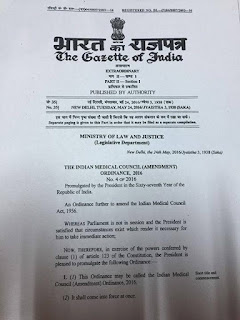 Recently Centre Govt. passed a ordinance that the neet will be applicable for all states from next year, but all private institutes will be covered in neet from this year only.  Dont know when the final decision of NEET UG and NEET PG will be taken and the students will be relieved from the dilemma.    Minister Nadda interview on DNA India Putting to rest speculations that the Centre was trying to defer National Eligibility-cum-Entrance Test (NEET) this year by introducing an ordinance to keep states out of ITS ambit, Union Health and Family Welfare Minister J.P. Nadda on Tuesday said the ordinance has in fact been implemented and given a statutory support taking note of the concerns put forth by the various states. Nadda told a press briefing that President Pranab Mukherjee has given his nod to the NEET ordinance sent by the Union Cabinet for approval. "The NEET ordinance has been given a firm statutory basis. I would like to clarify. Some sections of the media had
Read Full Post >>
More posts