July 08, 2017
SIX new AIIMS are struggling to fill vacancies, with the Union Health Ministry not too hopeful about getting the right candidates for the 1,285 posts this year. One proposal being considered now is to hire retired professors up to the age of 70 years on contract as faculty. Last year, a total of 1,300 posts were advertised for the AIIMS at Bhopal, Bhubaneswar, Jodhpur, Patna, Raipur and Rishikesh. Only 300 were selected and just 200 finally joined. At his annual press conference last month, Health Minister J P Nadda admitted, “We are not getting good people. Hum chalis-chalis logon ko reject kar rahen hain (We are rejecting up to 40 people at a time).”

Each AIIMS received 600-800 applications on an average last year, which means only one in 14 applicants was found to be deserving and only two of three who were selected joined. The number of vacancies this year is only a little lesser. Bhopal has advertised 251 posts, Bhubaneswar 178, Jodhpur 204, Patna 253, Raipur 204 and Rishikesh 205. A total of 305 posts are sanctioned in each AIIMS, and the number of posts filled ranges from 55 in Patna, to 135 in Bhubaneswar. 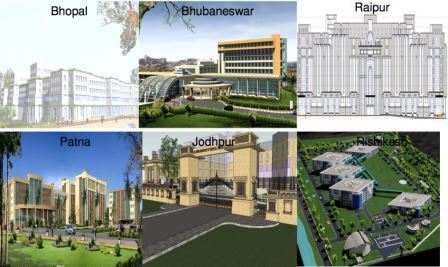 Officials associated with the recruitment process at the Union Health Ministry and at the new AIIMS say the problems in getting qualified faculty are manifold. While the substantially higher salary structures in the private sector for specialities such as nuclear medicine and neurosurgery is one factor, making recruitment for senior posts like professor and additional professor extremely difficult, the other is the lack of facilities in the smaller centres where the new AIIMS have come up.

Elaborating on the proposal to hire retired professors on contract as faculty, a Health Ministry official said, “That way we may get good, competent people who have retired from institutes like AIIMS-New Delhi, and PGI-Chandigarh.”

While a professor at an AIIMS would get around Rs 2.12 lakh monthly salary including HRA, an additional professor is entitled to around Rs 1.91 lakh. In the private sector, depending on a doctor’s discipline and the demand for it, he or she can earn up to Rs 7-8 lakh, said the director of one of the six AIIMS.

Last year, AIIMS-Jodhpur advertised 200 posts, got 700-800 applications, and found only 70-odd good enough to hire, said Director Dr Sanjeev Misra. This year, for 220 posts, the institute has received a thousand applications and some 80-odd may finally be recruited.

“The response is very good, but we are clear we do not want to compromise on quality. That is why the selection process is stringent. We are looking for excellence in teaching and research because if we do not set standards high, it will become like any other medical college. Institution-building takes time, even AIIMS-Delhi took 60 years to reach its present standards,” Dr Misra said.

AIIMS-Bhubaneswar, with 135 of 305 faculty posts filled, is the best placed among the new institutes. Director Dr Gitanjali Batmanabane believes it is because people from Odisha want to go back there to serve it.

“It is more difficult to get faculty in disciplines that are in demand in the private sector, but our position is relatively better because people are keen to work for the state. I am hopeful of reaching 960 beds by the end of the year,” she said.