April 10, 2018
HYDERABAD: A division bench of the Hyderabad High Court on Monday made it clear that the petitioner candidates seeking admissions in the 50 per cent state quota seats in post- graduate medical courses were not entitled for reservation (for in-service candidates) as per GO 260 and 27 issued by the state medical and health department on July 10, 1997 and April 10, 2017, respectively. They are only entitled for weightage of marks, in accordance with the MCI regulation 9(IV), for admission into PG medical courses, the bench ruled.

Further, the bench made it clear that the petitioners were entitled for reservation in the 50 percent state quota seats in PG medical diploma courses provided they have served a minimum of three years in tribal areas.The bench, however, found fault with the Telangana government for mentioning in the impugned GO that it would award weightage marks to the in-service candidates who have a minimum three years service in tribal areas.

While setting aside the words “a minimum three years of service”, as amended by GO 21, the bench made it clear that the petitioners were entitled for the benefit of weightage marks for the services rendered by them in those areas even less than three years. The incentive weightage marks would be calculated at 10 percent per year of completed regular and continuous service in tribal areas, it noted.
The bench of Acting Chief Justice Ramesh Ranganathan and Justice K Vijaya Lakshmi was passing this order in a batch of petitions filed by Dr M Vasurchana Reddy and 12 others, who have passed their MBBS or their PG diploma course and employed by the state government, seeking admissions to PG medical degree and diploma courses as per  GO 27.

The petitioners challenged GOs 21 and 22 issued by the Telangana government for awarding weightage marks in place of reservation for in-service candidates and for earmarking 50 percent of the PG seats in government medical colleges to All India quota. They pointed out that the impugned GOs which were issued based on the proposals of the Vice-Chancellor of Kaloji Narayana Rao University of Health Sciences, Warangal, would run contrary to the law declared by the Parliament in AP Reorganization Act, 2014. As per GO 27 i.e. Telangana Medical Colleges (Admission into PG medical courses) Rules, 2017, about 30 percent of the seats in clinical broad specialities and 50 percent of the seats in pre and para clinical broad specialities for degree and diploma courses were reserved for in-service candidates. Under the Act, the said quota would be in operation for 10 years.

The medical officers and civil assistant surgeons serving in the state were eligible for in-service quota for admission into PG courses. However, these eligible candidates would be forced to stop their studies at MBBS level because of the above two GOs, they argued. 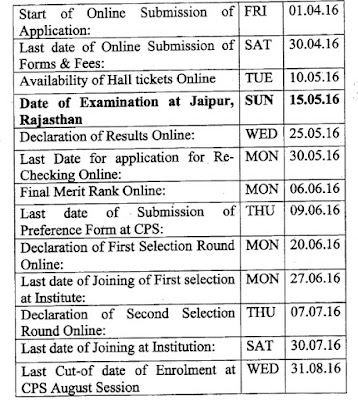 Test, last date of application submission, applicable fee structure etc is available on www.raiswasthya.nic.in Online application form submission will start from 1st April, 2016 and would be available till 30th April, 2016 on www.cpsmumbai.org . Common Entrance Test would be held on 15th May, 2016 in Jaipur , Rajasthan.

Please note that all these courses are accredited by Rajasthan Medical Council, Jaipur.